Should you be out at dusk these brisk December days, especially near a woodland, you might well hear the hu-hu-hu-WHO! WHO! of the great horned owl (Bubo virginianus). The owl is one of our fiercest local predators, and the largest of the owl family in the Barrington area.

Countless times have I stood in the grassland at Cook County’s Spring Creek preserve, as the light is fading, and thrilled at the deep-toned hoots coming from the woods on the slope. Usually there is a duet: the male hoots his notes, then the female counters in the same cadence but at a slightly higher pitch. The stillness of twilight, the chill in the air seem to amplify the serenade. For me, it’s one of the most moving aural experiences nature has to offer.

It is more difficult to see great horned owls than to hear them. They are nocturnal creatures, winging their silent way in darkness through woodlands and over fields in search of prey. Most sightings come by surprise, for instance when you might flush an owl from beside a driveway where it has paused to grab a rodent. The owls roost during the day, blending extraordinarily well into their surroundings. Should you happen to approach a tree where one is perched, it is apt to fly off and catch your attention with its sudden exit, though usually it disappears from view just as suddenly. Another clue to an owl’s perch is a band of crows noisily “mobbing” the predator.

Great horned owls live in the Barrington area year ‘round. They do not make their own nests but rather use large nests of branches fashioned by other birds – red-tailed hawks or crows or Cooper’s hawks – or nest in large tree cavities. For most birds in our area, winter is a time for survival until breeding season in spring. But for great horned owls, winter IS breeding season. As we prepare for the Christmas holiday, great horned owls are courting, mating and soon will be incubating eggs. 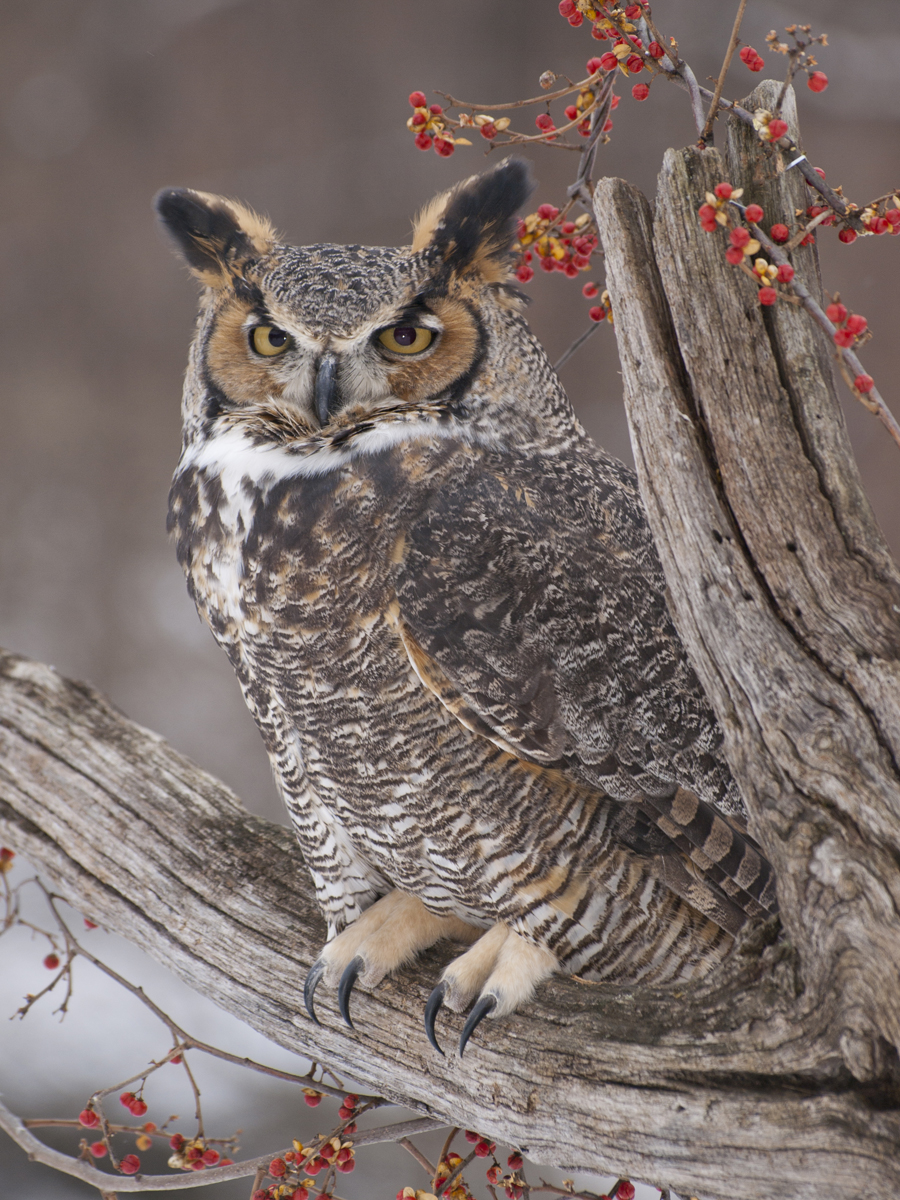 Eggs number usually two, sometimes three, and the chicks hatch in late winter or early spring. Both parents are conscientious providers and feed the chicks a steady diet of rodents, rabbits, skunks, other birds – whatever they can get their enormous talons on. They have the most varied palate of all raptors.

A couple decades ago I was thrilled to discover the nest of a great horned owl only 50 feet from our house, in a woodland of mostly oak and hickory trees. For weeks I summoned friends and colleagues for a special look, through a telescope on the driveway, at the fast-growing youngster. I became less enamored of – but still intrigued by – the juvenile once I discovered that it was the creature making loud, incessant screeches outside our bedroom window nearly every night that summer. It stayed remarkably close to the nest area throughout summer and I encountered it regularly in the daytime, delighting in its awkward flight, plumage changing from mottled gray down to cryptic adult feathers, and size that exceeded that of its parents.

The “horns” of the great horned owl are not horns, nor ears, but rather ear tufts – feathered projectiles with the appearance of horns. The ears, as with all owls, are tucked behind its cinnamon-colored facial discs where they receive sound with far greater sensitivity than most in the animal kingdom. But with mice, voles, and other small rodents forming a large part of the owl’s diet, acute hearing to detect little mouse feet is essential, as is keen eyesight to locate the prey.

With days growing shorter and colder (though not nearly so cold as usual this year!), it often takes firm resolve to take an outing to a local woodland or forest preserve at twilight. But it is always worth the effort. It is a special treat to experience the end of day, feel the fading light, hear the twitter of songbirds diving into thickets to roost for the night. And who knows, you just might catch the deep, haunting tones of great horned owl hooting to its mate.

Wendy Paulson has lived in Barrington Hills since 1975, and has led bird walks in the area for many years. She re-established the Nature Lady program in the Barrington 220 school district and St. Anne’s in the late 70s, under the auspices of The Garden Club and Little Garden Club of Barrington. Wendy developed the education program for Citizens for Conservation, initiated and edited its newsletter, and has been an active volunteer with CFC for over 30 years.

During interludes in New York City and Washington, DC, Wendy taught classes about birds in the public schools and is helping to develop a similar program in Chicago public schools with Openlands. She is chairman of The Bobolink Foundation, serves on the board or advisory committee of multiple conservation and bird-related organizations, both domestic and international, and is former chairman of IL and NY chapters of The Nature Conservancy.

Wendy and her husband Hank have two grown children and are avid hikers, cyclists, and kayakers.

Do you have any questions for Wendy about birds you’ve spotted in the Barrington area? If so, Just ask Wendy via the comments box below.

CLICK HERE to explore all of the local bird profiles featured in Wendy’s monthly Birds of Barrington series at 365Barrington.com.