Authors, Barrington Area Library, Books & Beyond, Books and Reading, Library, The List Year to Date, Things to Do

I started re-reading The Unlikely Pilgrimage of Harold Fry this week to prepare for our upcoming interview with the book’s author, Rachel Joyce.  The book is the fiction selection for Barrington Reads, the annual February community reading event in Barrington.  Hopefully some of you are also reading the book and might consider taking part in our “Tools for an Unlikely Pilgrimage” contest and book discussion.  We have a new prize inspired by the book to add to the mix this week!

In addition to a new pair of shoes from Barrington Running Co., our second contest prize is from Theresa Patton who has offered a journal and pen to one of our winners from TT Patton, her beautiful stationery store on Station Street! 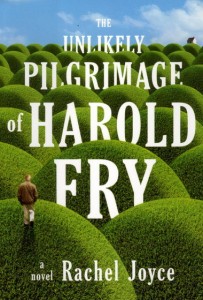 To enter the contest for a chance to win one of our “unlikely pilgrimage” prizes, all you have to do is read along and share your thoughts about the book or answer today’s contest question in the comments box below.

This week, we’re focusing our attention on chapters 1 through 10, when the main character, 65-year-old Harold Fry, sets out on his pilgrimage, a 600+ mile walk across England to make amends with a long-lost friend before she dies.

We learn a lot in these first 10 chapters about the strained relationship between Harold and his wife Maureen.  Rachel Joyce reveals the isolated nature of Harold’s childhood and hints to how that has impacted his own approach to parenting.  She introduces the relationship between Harold and his son, David, the character who makes this book so heartbreaking.  And we begin to discover pieces of Harold’s past that relate to his bond with Queenie, the woman whose letter triggers his “unlikely pilgrimage”.

And that brings us to this week’s contest question, which is an extension of the most recent book discussion hosted by the Barrington Area Library.  Adult services librarian, Liz Kirchhoff, says one of the questions that came up during their conversation made for some really interesting discussion.

“In the beginning of the book, we kind of understand that Harold is going on his journey to atone for what he believes is his betrayal of his friend Queenie. Is that really the reason he goes though?  As we discussed, we thought that it was also that he wanted space from Maureen, and that he was missing some purpose in his life since he had just retired.”

The library’s book discussion has inspired our second contest question:

What do you think are the more underlying reasons that motivate Harold’s spontaneous journey?

To join the conversation and for a chance to win one of our “Tools for an Unlikely Pilgrimage” prizes, share your answer to that question or your thoughts about the book in the comments box below.  (For shortcut to comments, CLICK HERE)

We received some interesting responses to our first question, by the way, which was “What did Harold learn during his “unlikely pilgrimage” that changed his life for the better?”

“My overall sense is that Harold learns that he is not alone in feeling flawed, lonely, and often not up to the task of being truly alive. On every step of his journey, he encounters people who are also burdened by past and/or present – lovers who walked away, secret lives they can’t reveal to most people, illnesses, attempts at suicide, substance abuse, pride and arrogance that keep them from really connecting with people. He learns that the most extraordinary and difficult moments in his life were exactly the times when he was most human, and that he should feel a sense of joy in having survived and come as far as he has, rather than wallowing in shame or failure. He also learns that it’s never too late to start fresh, to try again, to make up for the weaknesses of the past.”

“I think Harold learns a lot about himself. By the end of the book, you really get the feeling that he is beginning to realize how what he does makes a difference (for better or for worse) in the world. He also learns that every day is a new day, and that it’s never too late to try to fix old mistakes and change things about himself that he thinks he should. I think that one of the loveliest parts of the book deal with Harold’s relationship with his wife. At the beginning, they’re so distant from each other. Without giving too much away, it’s fair to say that by the end, the two of them have an understanding and tenderness for each other that they haven’t had in many years. That deep awareness of another person is a huge change for Harold, who has always been a bit detached from the world.”

The whole purpose of our contest is to come up with a list of questions you would most like to hear author Rachel Joyce answer when we interview her via Skype in Barrington High School’s Guidance Resource Center at 1 p.m. on Sunday, February 23rd.  All are welcome for that interview and we hope you will join us!

In the meantime, stay tuned as we continue our book discussion. The library’s book club will again be talking about The Unlikely Pilgrimage of Harold Fry in The Garlands Burnham Room on Friday, February 21, at 2 p.m.  (CLICK HERE to register.) If you can’t make the meeting, we’re going to be covering the following chapters on these upcoming dates right here at 365Barrington.com:

For a list of other upcoming events scheduled during the month of February inspired by The Unlikely Pilgrimage of Harold Fry, you’ll find the full Barrington Reads schedule on the library’s website at BALibrary.org.

Prev post 44. Health Beat: Cool Heart Treatment for a Return to a Normal Lifestyle
Next post 46. Have a Blast from the Past at JourneyCare's Decades Dance