As we head into the weekend before Thanksgiving, buying groceries for next week’s holiday tops to-do lists everywhere. The shelves, food cases and displays at Heinen’s Grocery will be fully stocked for shoppers with all the Thanksgiving turkeys, ingredients, baked goods and prepared foods you could possibly need for your Thanksgiving feast. Whether you’re cooking your entire meal from scratch or would like to have the company’s chefs do the cooking for you, Heinen’s has you covered from start to finish with recipes steeped in family tradition.

Family, service and quality are at the core of the company’s story and their commitment to those values has helped Heinen’s grow at warp speed in 2014. That’s what Tom Heinen says he’ll be feeling most thankful for as his own family sits down to their Thanksgiving dinner table. After opening Barrington’s Heinen’s store in August of 2012, this year they expanded further into Chicagoland, opening stores in Glenview, Bannockburn and Lake Bluff. That brings the total number of Heinen’s Grocery stores to 21, with four in the Chicago suburbs and 17 in the suburbs of Cleveland.

“I’m really thankful for all of the people who have joined our team here in Chicago and for their help getting three new stores open in the past six months. We’ve had awesome people join Heinen’s and, thanks to our new associates, I’m optimistic about our success in this market. It’s been a big year for Heinen’s.”

With so much to be thankful for, I asked Tom how he’ll be spending the holiday and what the most popular dishes on his family’s table will be. Tom says he’ll be celebrating Thanksgiving with his twin brother Jeff, with whom he oversees the company.

When you run a growing grocery chain, what kind of Thanksgiving turkey makes it to your table? Tom says Heinen’s offers a variety of high-quality fresh and frozen turkey options, but they always come back to one bird.

“Our fresh Plainville all-natural, antibiotic and hormone free turkey is what we serve on our table every year. We think it has the best flavor, is the least bruised and best handled bird and I think you get a more true, natural turkey taste when you don’t treat the animal with anything.”

For another all-natural option, Tom says you can’t go wrong with Heinen’s Amish Country Turkeys and he says frozen turkey fans will be highly satisfied with Heinen’s Honeysuckle and Butterball choices. Tom says one of the main points-of-difference for Heinen’s at Thanksgiving is that you can order your turkey to your exact specifications. “At Heinen’s you can call us and order your turkey by size.  If you want a 14-16 pound turkey, just place your order and, when you come in to pick it up, we’ll give you exactly what you want.” 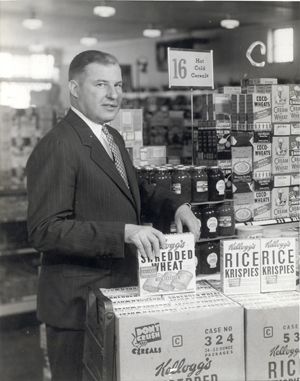 And you don’t have to stop there. Every year Heinen’s offers a complete Thansksgiving menu featuring traditional dishes created in their kitchens from family recipes they’ve gathered over time. And that starts with what Tom Heinen says is the star of the show on his family’s Thanksgiving table. It’s their Grandpa Joe’s Sausage Stuffing, named after the company’s founder, Joe Heinen.

“Our grandfather’s sausage stuffing is made with sweet Italian sausage. It’s a huge home-run with anyone who has ever come into the Heinen family and it’s the most popular thing on our table.”

From turkey to stuffing to all the additional sides you could dream of, Heinen’s has developed a mouth-watering selection of dishes that they’ll prepare for you this Thanksgiving. After nearly twenty years working for the company, Corporate Chef Jackie Novotny says one thing they’ve learned is that Heinen’s shoppers love traditional foods for Thanksgiving dinner. That’s why their menu is packed with family favorites.

Jackie Novotny will be serving her own family dishes prepared at Heinen’s this Thanksgiving and says there’s one particular menu item her guests can’t get enough of.

“Our turkey gravy is to-die-for. You could drink it, it’s so good!  If you’re worried about making gravy, just pick it up at Heinen’s. It’s just like Grandma used to make.  It’s really that good!”

“What makes all of our Thanksgiving recipes so delicious is that they’re really just like homemade dishes. They’re not coming out of a can. They’re not being manufactured in a factory somewhere. They’re all created in our kitchens inspired by family-recipes shared by Heinen’s own chefs.”

You can order Heinen’s Complete Turkey Dinner or pick and choose dishes from their menu. But the one thing they request is that you pre-order your dinners at least three-days in advance. And, don’t forget that Heinen’s is closed on Thanksgiving day so employees can spend time with their families.

CLICK HERE to review Heinen’s turkey options, CLICK HERE to see the store’s full Thanksgiving menu and, to be truly inspired, stop by Heinen’s to start your shopping today.

One thing we know from experience is that you’ll start to see new faces around Heinen’s this week, as visiting relatives begin to arrive for the holiday. The energy alone is enough to make you feel nostalgic for the people you love, the people you miss and the people with whom you’ll be sharing this year’s Thanksgiving feast.

Over two weeks in to Illinois’ “stay-at-home” order…