Barrington History, News, news, Sesquicentennial, The List Year to Date, Things to Do

Barrington celebrated the official 150th anniversary of its incorporation as a village this week.  Local leaders kicked off the year-long festivities at Village Hall on Monday by recognizing the committee in charge of planning all of the upcoming Barrington Sesquicentennial events throughout 2015. 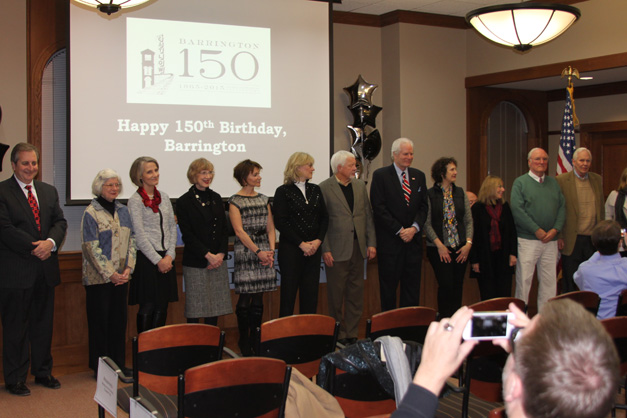 Rev. Dr. Zina Jacque of Community Church of Barrington offered a reflective invocation to start the program and local historian, Barbara Benson, read a passage about one of the first families to settle in Barrington.  Guests took part in a champagne toast and were treated to birthday cake artfully prepared by Barrington’s Ambrosia Euro American Patisserie.

Barrington Children’s Choir entertained guests during the program singing patriotic songs and a special rendition of “Happy Birthday to You” sung just for Barrington.

One of the highlight’s from Barrington’s 150th birthday celebration was when lifelong resident, Tim Dunn shared stories about growing up in Barrington.

Tim talked about his ancestors who played a significant role in shaping Barrington history including Arnett C. Lines who was his grandmother’s brother-in-law.  Not only was Arnett Lines the grandson of Barrington’s first elected mayor, he was on the school board, he was an influencer in the community and he was also the unofficial historian for Barrington at that time. Today, one of Barrington’s eight elementary schools bears his name.

As the co-chair of Barrington’s Sesquicentennial Committee, Tim says he’s proud to pick up where Arnett C. Lines left off in helping preserve and pass on Barrington’s legacy for future generations.  Here are Tim’s Reflections on Barrington that he shared during the community’s 150th birthday party this week, offering us a taste of what life here was like in years-gone-by.

150 years ago Barrington was recognized by the Illinois legislature as an incorporated village on February 16th, 1865. At that time, the Civil War was about to end and the United States was expanding westward into lands occupied by Native Americans. The railroad had come through present day Barrington and many original settlers moved north from Barrington Center to what would later be the local hub of commerce and transportation in Barrington Station.

My great grandfather, Simon Kirby came from Ireland in the 1850’s and settled in Barrington in the 1880’s, marrying the daughter of a prominent Barringtonian, Elizabeth Donlea.  They later moved from the original Barrington Center into town, building a house in 1888 that still stands on Lincoln Avenue. 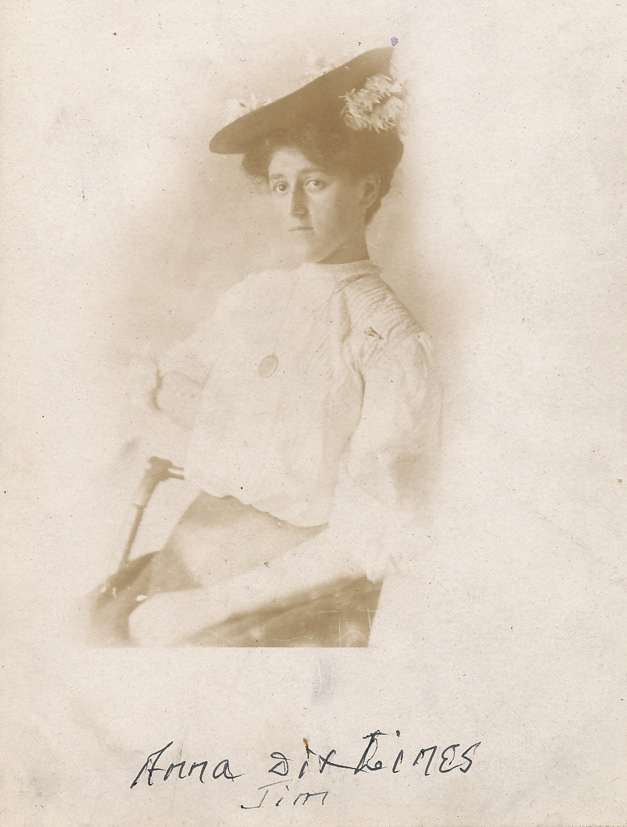 My grandmother’s sister, Anna Dix, married Arnett C. Lines, son of Fred Lines, who built the Robertson House on West Main Street or Barrington’s White House, which is currently undergoing restoration. Names such as Kirby, Donlea, Dunn, McIntosh, Lines, Dix, Welch, Olcott, Carr and McGraw are names of those that I was related to through direct family ties or marriage.  I was a product of the gene pool of early Barrington.

The most significant person in my life, other than my parents, was Arnett Lines. My family knew him as “Uncle Arnett”.

He was in his 70’s when I knew him and I really didn’t appreciate him or his accomplishments until he was in his 80’s and I was in high school.

When I was very young he used to play Santa Claus for our family at Christmas. I didn’t know it was him until a few years later.  I just know that he was a pretty skinny Santa!  We got to celebrate a second Christmas at his house on Lake Street so I thought that was a pretty good deal.

My father passed away in 1964 when I was 12 and Uncle Arnett took over as a male figure for me. I owe much to Arnett as he left me money to complete my education, which I used to get a Masters Degree from Northwestern and eventually become the Social Studies Department Head at Barrington HIgh School, where I taught History and Government and coached football and wrestling from 1987 until I retired in 2008.

Growing up in Barrington was idyllic in the 1950’s and 60’s. The Village had a population of about 5,000 and people knew each other. Kids would play all day until the street lights would come on about 7:00 in the evening. We wold go to East Park, now Dick Miller Park at Summit and Lincoln Avenue, or would ride our bikes to North Park, now Langendorf Park, to play baseball or swim all day at the pool.

Our family didn’t have a car, as my father worked for the railroad and would take the train to work every day. It was a three block walk to the Jewel which was located across from the current Starbucks on Hough Street or to the A & P grocery store further north where the Volvo Dealership currently operates. It was more of a hike to the National Tea Store where the Viking Ski shop is located. My brothers would walk to Barrington High School and I would walk to Hough Street School when I was in Kindergarten or Saint Anne School from 1st through 8th grade. Today, there are communities that parents would get arrested for child abuse if they let their kids walk that distance unescorted.

If you needed clothes, you would go to Lipofsky’s Department Store or Bob and Betty’s where they carried everything. As kids we would go tot he basement of Lipofsky’s and put our feet in the fluoroscope to see through our shoes and get an x-ray of our feet.

They had the wooden floors and nuts and bolts stacked to the ceiling. If they didn’t have what you needed, it didn’t exist.

Barrington had two bakeries, Marie’s and Countryside, located across from each other on East Main Street. Before Jewel-Osco moved to Main Street there were three pharmacies, Pohlmans, Esh and a third located where the Pizza Factory currently operates. I do remember it had a soda counter which was perfect after a long day of baseball or swimming at North Park. McLeister’s Restaurant and Candy Shop was the precursor of the current Bread Basket. They were known for their homemade candy.

There was also Panker’s Corner Cupboard prior to it burning down, the Canteen, and Bert’s Bank tavern. That had the best hamburgers and homemade pies in town. Bert’s was located in the Barrington State Bank Building, currently McGonigal’s Pub. I worked there when I was in 6th and 7th grade emptying beer bottles and filling the coolers. My pay was $1.50 an hour and all I could eat. I think they lost money.

Henry Michael ran the butcher shop originally located on Park Avenue and later next to the Catlow Theater. He had the sawdust on the floor and a barrel of dill pickles and crackers. His son Richie and I were fast friends and I would regularly visit the shop eagerly awaiting a snack. I had an affinity for raw ground beef and he would put a handful of meat in a wrapper on the counter and say, “Here you are, Cannibal!” We were close friends until he sold the shop in the 1970’s. The Catlow Theater, still thriving today, was the enter of activity in the 50’s and 60’s.

Mrs. Dorazil would sell the tickets, then 25 cents, and Mr. Catlow would stand in the doorway and make sure the kids were acting properly in the theater. Sunday Matinées, newsreels and cartoons were the highlight of the week. I vividly remember in 1959 when the movie PT 109 came out, it opened at the Catlow and Barrington resident Barney Ross, a member of the crew with John F. Kennedy, spoke before its opening. 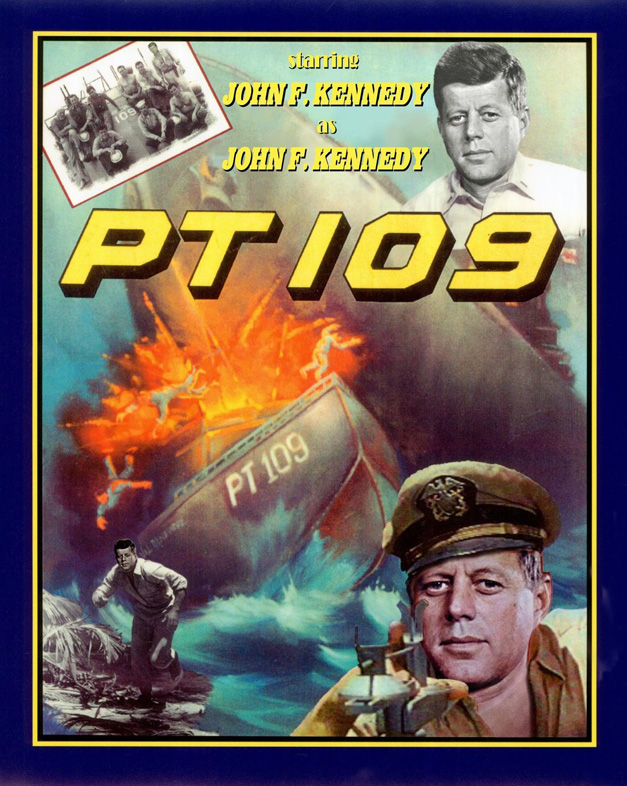 Kennedy, a candidate for president, later came to Barrington and spoke at the Ten Pin Bowling Alley, then located on Cook Street and again at Barrington High School in October of 1960. My mother, a big Kennedy fan, shook his hand and, according to the Barrington Courier said she’d “never wash that hand again!”

Johnny was a veteran of World War I, a gold miner in California, and a railroad worker. His stories of old Barrington would entertain me and my children for hours. He taught me to clean a snapping turtle that, unfortunately for him, made his way to Johnny’s house and wound up in a pressure cooker. He was another one of my links to the Barrington of old. His passing in 1990 at the age of 96 was a sad day for my entire family.

Barrington has grown in population while still maintaining its quaint rural appeal. It has undergone continual changes and the center of town will have a new face in the next year. I have been fortunate to grow with the town. I have had the opportunity to be involved with the Saint Anne Parish Community and serve as a village trustee. I have also been fortunate to have taught and coached great kids in the community. I grew up on East Lincoln Avenue and raised my children on West Lincoln Avenue and Dundee Avenue. My next move will be three blocks north to Evergreen Cemetery where most of my family currently resides. Hopefully it won’t be anytime soon as I have a lot to do in Barrington before that happens. Once again, happy birthday, Barrington and enjoy the Sesquicentennial Celebration!

If you missed this week’s Barrington Sesquicentennial Birthday Party, there are plenty of upcoming opportunities to celebrate in 2015…

For more details about Barrington’s Sesquicentennial Celebration and the full list of upcoming events, visit Barrington150.org. 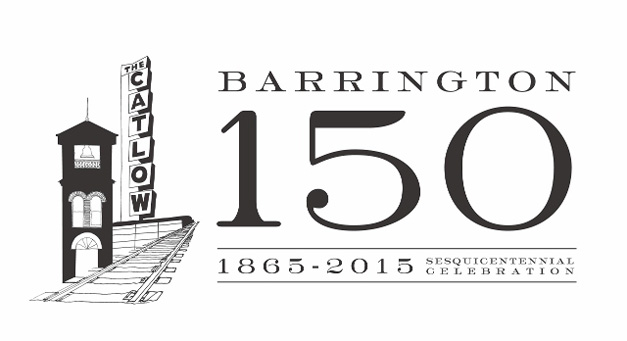