McGonigal’s Pub in Barrington is THE PLACE to BE for your morning coffee stop tomorrow. The Pub’s manager says the’re expecting to have people lined up at the door at the crack of dawn tomorrow to be part of WGN Radio’s LIVE morning broadcast at McGonigal’s during the latest stop on WGN’s “Hometown Voices” Tour. 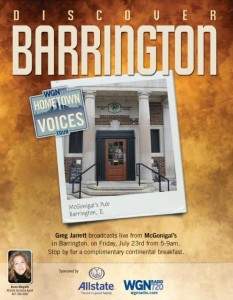 WGN’s coordinator for tomorrow’s event says they selected McGonigal’s as the location for their LIVE radio broadcast because it’s right in the heart of downtown Barrington. WGN started this series of hometown radio broadcasts to show that “…the best things in life lie just off your front stoop.”  Radio host, Greg Jarrett, will be broadcasting LIVE at McGonigal’s from 5 to 9AM along with news anchor, Andrea Darlas and Sports Director, Dave Eanet.

McGonigal’s manager, Damien Dunne, says the WGN crew will be rolling in during the middle of the night to set up for the broadcast and he says it’s a great way to shine the spotlight on Barrington and give a boost to local businesses.

Tomorrow’s LIVE broadcast will take place upstairs at McGonigal’s.  The pub will be setting up a Free continental breakfast, with coffee and juice, for anyone who drops by for the show. And the WGN staffer in charge of tomorrow’s event tells me they plan to interview several Barrington officials and other local folks during the course of the broadcast so it should be an entertaining way to start a Friday and kickoff the weekend!

You’ll find more information about tomorrow’s broadcast on WGN’s website by clicking HERE, you’ll find McGonigal’s Pub in Barrington at 105 S. Cook Street and can reach them by phone at 847-277-7400.

Summer is right around the corner and with…

January is the perfect time to make soup.…

Tickets are selling fast to Smart Farm of…