Mark your calendars for a brand new music festival happening at Wool Street in Barrington this February.  It’s called the Band Together Music Fest and will feature performances by six bands which include members who are students, alums or have other connections to Barrington District 220 schools. 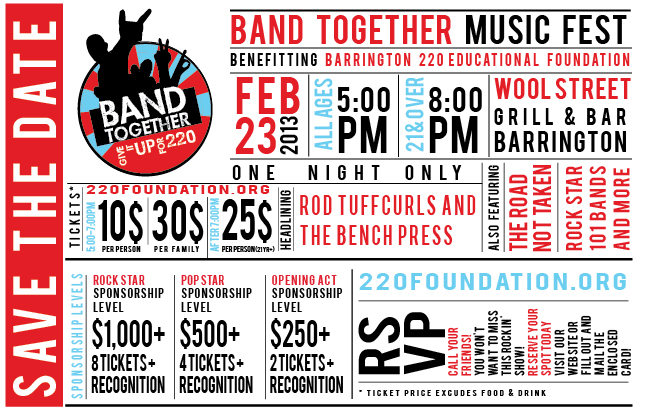 The fest will begin at 5 p.m. at Wool Street Grill & Sports Bar (128 Wool Street) on Saturday, February 23rd, with performances by bands from Consolidated Music’s Rock Star 101 program.  At 6 p.m., The Road Not Taken and White Shadow are scheduled to take the stage followed by Pat McKillen Music at 7 p.m.

The headlining band is Rod Tuffcurls and the Bench Press, a “party/fun/friendly cover band” from Chicago that describes their act by saying, “We combine ‘competent’ musicianship, ‘bone-crushing’ 3-part-harmonies, and ‘interesting’ song choices to provide the audience with an experience away from which they can not willingly look.”

Another highlight will be a performance by District 220 Schools Superintendent and pianist, Dr. Tom Leonard, who will tickle the ivories for the crowd and the cause.

Band Together will be an all-ages show from 5 p.m. to 8 p.m. and the cost is $10 per person or $30 per family up until 7 p.m., when the cost to enter increases to $25 per person.  Starting at 8 p.m., the fest will become an adults-only event for guests age 21 and older.  Food and drink are not included in the price, but all proceeds will benefit the Barrington 220 Educational Foundation. 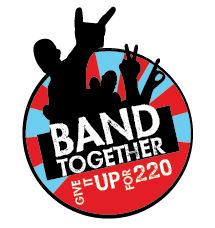 The foundation’s mission is “To acquire and distribute resources in support of Barrington Community School District 220 for programs and projects aimed at enhancing, enriching and supplementing learning opportunities for students, staff, and community.”

In recent years, the group has hosted a Chili & Music Fest as their big winter fundraiser.

This year, they’re trying something new in bringing these local bands together to raise about one third of their annual fundraising goal.

The Barrington 220 Educational Foundation has donated more than $1.7 million to support Barrington 220 school programs, classroom needs and curriculum initiatives since 1999.

For more information about the Band Together Music Fest and District 220 Educational Foundation, visit District220.org.  And, for a taste of what’s to come, here’s a video of Rod Tuffcurls and the Bench Press and their lively rendition of Paul Simon’s crowd pleasing classic, Cecilia.