We all watched on national TV last week as Station Middle School 8th grader, Pranav Sivakumar, sailed his way to the top, placing second in this year’s Scripps National Spelling Bee in Washington D.C.  It was Pranav’s third time competing in this bee, but his first time making it past the semi-finals.  I met up with our local “spellebrity” and his very proud and happy family at the Barrington Area Library just after they returned from the bee last weekend.  And I learned that Pranav has two priceless secrets to his success that apply at all ages and stages of life.

Meeting Pranav at the library made sense.  His mom, Anu, says the library has played a big role in their lives since they moved to Tower Lakes nine years ago, when Pranav was just four-year-old.

Over the  years, they’ve found rare books at library book sales that helped Pranav prepare for his spelling bee successes. And then, of course, there are the dictionaries.

Pranav’s spelling bee coach and his dad, Sivakumar, says there are over 400,000 words in the dictionary.  To prepare for his spelling bees, Pranav studied about 45,000 of those words.  45,000!!!!!!!  With the help of his family and older sister, Janani, he spent over 15 hours a week studying words and their roots leading up to this year’s Scripps National Spelling Bee.

Pranav Sivakumar with his Dad at the Barrington Area Library

And you know where Pranav says he found the motivation to study all those words?  His teachers at Hough Street Elementary School in Barrington.  And that’s one of the two secrets to his spelling bee success.

Secret #1 – Listen to Your Life’s Teachers

Pranav says he owes so much to his teacher who helped him prepare for his very first spelling bee when he was in the third grade at Hough Street School.  He was a student of Maggie Gruber, who is retiring this month after 29 years of teaching.

And here’s what Pranav says about both Maggie Gruber and his fifth grade teacher at Hough, Georgia Nelson.  “I would say that I wouldn’t have made it to second in the national spelling bee if it wasn’t for them.  They were the ones who started my first spelling bee in the third grade.  So I think they made a deep impression on me and I’m very happy that I was in their class.  I don’t think I would have gotten this far without them.”

Pranav’s 13-year-old advice here resonates.  I am well beyond my school years, but will work harder to look for and learn from the teachers in my life.

And I can’t deny the impression Pranav and his family made with the second secret or reason he credits for his spelling bee success.

Secret #2 – Do Your Work, Without Worry

Pranav’s mom, Anu, says there’s a Sanskrit saying from The Bhagavad Gita that is something their family has carried with them from their home of origin, along the coast of Madras, India.  “There is a saying in our country that says, ‘Do your work or do your duty, to the best of your abilities, without worry or attachment to the results.  Let the results take care of themselves.’  The analogy they give us is like a farmer who works his land.  He doesn’t have full control over what the harvest is going to be like because of so many external factors.  But, if he doesn’t do the work, it’s guaranteed he’s not going to get any result… So when Pranav made it to second place, I had tears in my eyes.”

“It’s like a pivotal moment for him in terms of confidence and learning that, when you put in the hard work, the results automatically come sooner or later.” 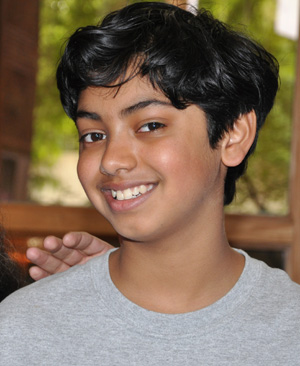 This beautiful outlook and approach to life made an impression on a young Pranav, who spent two hours on weekdays and six hours on weekends preparing for this spelling bee. “I think this saying is one of the reasons I wasn’t nervous at all when I went into the final round.  I know that, if I do the best I can, the results will come.  So I thought about that and just did the best I could.”

Pranav’s parents believe the confidence he has gained will last well beyond the monetary rewards and notoriety that have come from last week’s Scripps National Spelling Bee.  And he has big plans for the future.

“I always liked looking at the stars and looking into astronomy and I also like physics, so I decided I want to be an astrophysicist when I grow up. So I’ll be working on a lot of science and astronomy and that kind of thing this summer and in the future.”

Though he missed the ceremony to participate in last week’s spelling bee, Pranav is proud to say he has officially graduated from Station Middle School in Barrington.  He returned to a hero’s welcome to visit with fellow students at the school this week.  He reconnected with his teachers, autographed yearbooks and walked away having taught us a few lessons of his own.

Congratulations and best to you with all of your hard work ahead, Pranav!  Here are some scenes from your homecoming in Barrington.

High Fives for Pranav at the Barrington Area Library

Rare offering in The Squires! Beautiful 1.2 acre property surrounds this home. Enter through a bright, open foyer to formal living and dining areas with views of the back yard. Spacious kitchen, updated approx 10 years ago features a center island,

Prev post 111. Books & Beyond: Summer Reading is Summer Learning
Next post 113. Help Find a Cure for Cancer in the 2013 Relay for Life