Onion Pub & Brewery, Things to Do

Home Newsroom 263. Friday Happy Hour: Otis is on Tap at the Onion Pub!

After harvesting a bumper crop of hops, and brewing their signature wet-hopped beer, the folks at the Wild Onion Brewery can’t wait to introduce you to their newest IPA, Otis! It’s Friday, so what better time to head on over to The Onion Pub in Lake Barrington and have them pour you a pint? Word has it that it’s the best Otis yet!

We’re currently producing a video about the fascinating process of brewing Otis, so stay tuned for the big reveal. Until then, we’ll wet your whistle with a few photos of the work that goes into crafting this fabulously flavorful IPA.

The Wild Onion Brewery, which opened in 1997 in Lake Barrington, began brewing Otis three years ago in memory of their late employee Kathy Steele, who was lovingly nicknamed “Otis.” “Kathy brought so much life to the Onion Pub,” says Onion co-owner, Jennifer Kainz. “Her big smile and great laugh were contagious and made our guests request her service.  She loved the big and bold hop flavor, so this beer is a perfect tribute to her.”

In 2014, the Kainz family decided to dedicate the back lot of their 3-acre property to growing hops – partly to be more sustainable, and partly to decrease their dependence on outside suppliers (even if only by a tiny bit). The demand for hops has increased dramatically nationwide, due to the explosion of craft breweries across the country.  Yakima Valley, which produces nearly 80% of the total U.S. hop crop, is facing a severe drought which adversely affects the supply. Growing on-site also meant that they could brew a coveted wet-hopped IPA, which has to be brewed within 24 hours of harvesting the hops.

The brewers-turned-farmers chose to grow Centennial, Chinook, and Magnum hops, which they planted and mulched back in April. Hops grow from rhizomes, which are roots that put out shoots of new growth called bines. As the summer sun warmed and the days grew longer, the plants reached up and twined around the trellised 16-foot poles. The hops began to flower, developing the prized lupulin oils that give beer much of its flavor and bitterness.

When late August finally arrived, the vines hung heavy with hop flowers. The Wild Onion brewers gathered up friends and family for the monumental task of harvesting the hops.

Once the plants are cut from their trellises, they are brought inside the brewery for harvest – which involves picking each and every hop flower, or cone, from the vine. One by one, all day and all night. It’s a true labor of love.

What I wish I could share with you is the phenomenally fresh smell of the hops as they’re harvested. It’s citrusy and floral and earthy all at the same time. Imagine taking a big whiff of these:

After harvest, the brewers have a mere 24 hours to brew the wet-hopped beer. Any longer, and the lupulin – that golden oil at the center of the hop – will lose its potency and all will be for naught. (No pressure, though.)

The brewers mix hot water and grain to produce the wort to which the hops will be added. Malted barley and a little bit of oatmeal combine to create the most comforting smell ever, then – at just the right time – the fresh hops are added. The flavors mingle, then marry as the temperatures rise.

And, less than 48 hours after harvest began, Otis lives. The beer then ferments for a short while before being poured into kegs and bottled, then brought up to the Onion Pub for lucky customers to enjoy. This beer travels all of 50 feet from brewery to tap – you can’t get fresher than that.

Otis will be on tap at the Onion for as long as it lasts – get it while you can! The Wild Onion will also bottle a few hundred cases for limited release, but those will go quickly. Cheers!

Want to learn more about the brewing process? You can tour the Wild Onion Brewery on the first Saturday of each month at 2 p.m. Sign up here. Like The Onion Pub and Brewery on Facebook for the latest news on brews and events, like Trivia Night, which is every Wednesday at 7:30 p.m. (another great time to try Otis). 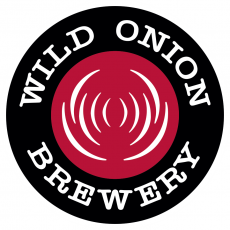