Chess Without Borders, a Barrington-based non-profit chess and charitable organization, recently hosted its sixth annual chess tournament benefiting Meher, a nine year-old girl who lives in the Govindpuri slum in New Delhi, India. Over 135 players of all ages competed in the tournament, which raised over $7000.

One hundred percent of the proceeds will be used to aid Meher and to increase offerings at the Maggie Gruber Computer Center, also in New Delhi.

A Little Girl in Need

When hundreds of chess players, volunteers, and supporters flocked to Hough Street School on Saturday, February 22, it wasn’t just about chess. The stakes were certainly high for the chess players, who came from Barrington schools and far beyond. Anxious players awaited the competition (my own son among them, nervous for his first chess tournament), hoping they would prove worthy opponents. But even the youngest were aware that, win or lose, they would contribute to a very important cause.

Nina Sethi, sister of Chess Without Borders founder, Rishi Sethi, lived in New Delhi from 2008-2009, working for Project Why as an English teacher. Nina had already partnered with Chess Without Borders to establish a chess program in the slum where she worked, but as it turned out her work there was just beginning.

She was at the organization’s Women’s Centere when little Meher began running in each day. “She always had to inspect the new people, so she was coming to check me out,” Nina says.

Meher’s sparkling eyes and outgoing personality made her hard to overlook. Nina knew immediately that she would do whatever she could to secure a better future for the sweet little girl.

Meher was just an infant when the mosquito net over her bed caught on fire. Miraculously, she survived the terrible burns, but the experience left her face and scalp badly scarred and her fingers fused. Meher’s parents feared for her future; the prospects for a disabled girl in India were glum. Nina learned they could not afford the multiple surgeries required to help their daughter.

“I immediately started communicating with my mother [Dr. Kiran Frey, Director of Volunteers at Chess Without Borders]. She connected me with Dr. Khazanchi, whom she knew from medical school. It all just started falling into place–it was really amazing,” Nina says. Dr. Rakesh Khazanchi, a plastic surgeon in Delhi, agreed to perform Meher’s surgeries at minimal cost…

This Emmy-entered video of Meher’s journey features footage taken by Brian Gruber, son of retired Hough teacher Maggie Gruber. It shows Meher’s remarkable transformation. (Nina Sethi also has a blog, A Future for Meher, that shows the process as it unfolded.)

With use of her hands, Meher was ready for school. Chess Without Borders volunteers decided to redouble their efforts, and raise enough funds to pay for 10 years of private schooling for Meher, at a cost of approximately $2,800 per year. And they would aid the local student population by installing a computer center in honor of retired teacher Maggie Gruber, a devoted supporter of chess at Hough and in the Barrington community.

The Chess Without Borders tournament, held annually at Hough Street School, is the main fundraiser for both Meher and the Maggie Gruber Computer Centre. “The first year we hosted the tournament–which I had wanted to do for a very long time, but was afraid we didn’t have space–we hosted 71 players,” Maggie says. “This year, we have 138. It’s just incredible.”

There was a $25 entry fee charged for participation, but Chess Without Borders volunteers have come up with lots of creative ways to raise additional funds.

Kiran Frey works tirelessly to ensure that the tournament is a success, but is quick to credit her student volunteers. “We have amazing student volunteers, like Eleanore Marwijk van Kooy, Prathik Kandimalla, and Jeevan Srivastava,” Kiran says. They were able to sell over 250 raffle tickets going door to door in the cold–we raised $1700 in the raffles alone.”

Ethan Gagliano, a fifth grader at Countryside Elementary School, raised money for Meher by asking 25 sponsors to give him $5 per game that he won in the tournament. He won three games in his section, raising $375–all of which will fund Meher’s education.

And there were some delicious and unique food concessions on offer, thanks to Barrington resident Zein Bertacchi and her sister Rima Said, who made authentic Jordanian fare–and even ran a hummus making demonstration.

The Chess Without Borders tournament, and the charitable efforts of the Barrington chess community, have a long standing history. They have donated over $100,000 to global causes to date, and have many ambitious plans for the future.

When Rishi Sethi founded a chess club at Grove Avenue School in 1998, as a fourth-grader, he hoped to pique his classmates’ interest in the game and teach some younger students how to play. Rishi charged a $5.00 fee for the class, which he socked away, not yet sure how the program would evolve.

As the program grew, Rishi – under the guidance of his mother, Chess Without Borders Director of Volunteers, Dr. Kiran Frey – began to see opportunities for chess-related community service. When he realized that many Alden Estates residents enjoyed chess, he started a partnership between the Grove chess club and the rehabilitation center–beginning a legacy of service that continues today.

Barrington’s growing chess community held tournaments, always donating a portion of proceeds–or chess sets or tables–to a charitable cause. Rishi and Kiran found endless ways to integrate chess and philanthropy both close to home (by donating funds to Citizens for Conservation, among others) and farther afield (donating chess sets to children in the Marshall Islands).

In 2001, Chess Without Borders (CWB) was born. Within a few years, CWB volunteers–many of them Barrington 220 students and their families–were traveling abroad to teach chess, donating chess sets and textbooks, and contributing funds to several charitable organizations. It seemed the concept was working.

So when, in 2004, Rishi asked his summer chess camp instructor, Grandmaster Yury Shulman, to come to Barrington, Shulman was intrigued. Rishi, who by that time was a high school student winning chess tournaments at the national level, already had over 300 students at various Barrington Schools. And Chess Without Borders had an impressive roster of service projects. After a few visits, Shulman was persuaded to move to Barrington in 2005, and re-establish his well-known chess program, the Yury Shulman International Chess School. 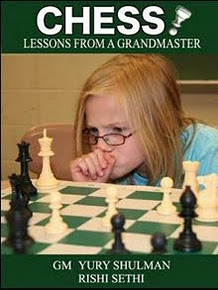 He has written a book, Chess! Lessons from a Grandmaster, which is available as a print book or a digital version (which he co-created with his former student, Rishi Sethi).

Yury is grateful for the ongoing efforts of Kiran Frey and Maggie Gruber.

“They give their whole hearts to the chess program, and find a solution to every problem.”

For additional information on chess in the Barrington Area, go to Yury Shulman’s chess program site, ShulmanChess.com or call 312-375-7475.

For more information on Meher and the Maggie Gruber Computer Centre, and to donate, visit Nina Sethi’s blog: A Future for Meher, at SecureaFuture.blogspot.com.

You’ll also find A Future for Meher on Facebook at Facebook.com/afutureformeher.