Arts and Entertainment, Festivals, Holidays, Memorial Day, Outdoors, The List Year to Date, Things to Do

54. Map Out Your Summer Art Festivals

The summer art festival season kicks off right here in Barrington this Memorial Day weekend. And the word on the streets is that the Barrington Village has hired the VERY BEST art festival production company to run the show. It’s a company called Amdur Productions and they’re the team behind thirteen Chicagoland Art Festivals taking place this summer. Just this morning, Amdur released their map of upcoming 2010 festivals starting with ours this weekend right here in Barrington. 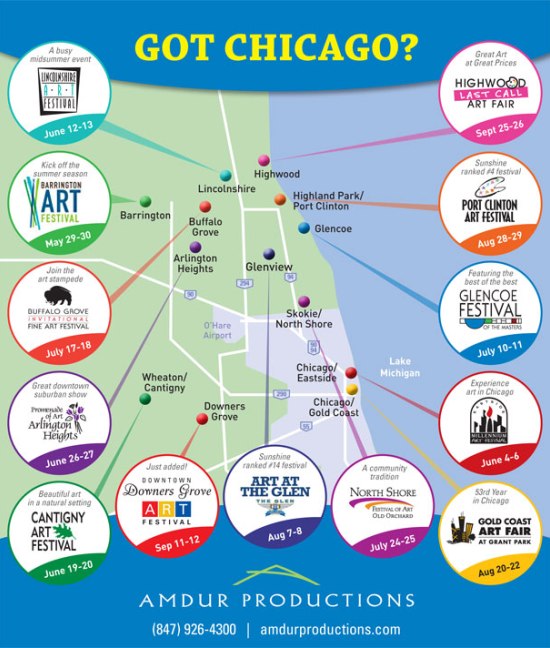 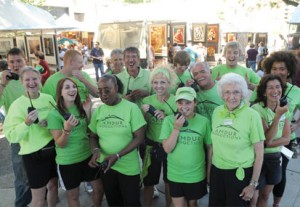 Amdur Productions is based in Highland Park, Illinois. It is the company behind art festivals in the Gold Coast, Highland Park, Glencoe, Arlington Heights, Glenview, Lincolnshire, Wheaton and Highwood, just to name a few. The buzz among the Barrington artists I’ve talked to is that Amy Amdur’s festival team runs like a well oiled machine. 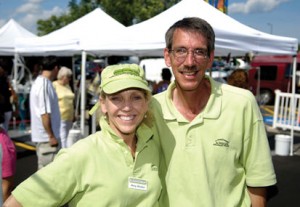 They say she has the highest standards when it comes to accepting exhibitors in her shows and she is very particular about the appearance and setup of artists’ booths.  Her PR expert says, “When Amy touches a booth, all of a sudden people seem to find it.  It’s like nothing I’ve ever seen before.” Amy Amdur has an eye for art and has mastered the art of festival presentation.  Her expertise helps artists sell more of their pieces and her experience with festival planning is extensive.  Amy started the business 27 years ago when she planned Highland Park’s first annual “Port Clinton Art Festival” which now draws 200,ooo people!  She’s also the planner behind the Gold Coast Art Festival which features the work of 500 juried artists.

There’ll be 140 artists from around the country displaying their work in downtown Barrington this weekend and thousands of people are expected to come to Barrington for the first annual festival.  The festival will take place primarily on Cook and Station Streets.  You’ll probably see the Amdur Productions team at work setting up booths, tables and barriers.  They’ll be the ones in the green shirts with walkie-talkies and it’ll be fun to watch them help make Barrington shine.

We’ll be writing about this weekend’s Barrington Art Festival every day this week here at 365Barrington.com, including information about featured artists, festival maps, exhibitor lists and details. Please stay tuned and feel free to leave your thoughts or comments about Amdur Productions, the upcoming festival or Barrington in general. We’d love to hear from you!