Events, Open Houses, Real Estate, The List Year to Date, Things to Do

As a Realtor, I’m a frequent visitor at open houses throughout the area, but THE MOTHER of all Barrington open houses is happening this weekend.  Barrington’s White House or the historic “Robertson House” across from Jewel/Osco on Main Street is on the brink of undergoing a major transformation and the public is invited to view the house up close, personal and from the inside out this Saturday and Sunday.

Built by John Lines in 1898 for John and Julia Robertson, Barrington’s White House was once considered the grandest house in Barrington.  John Robertson was a successful area banker and Julia a charming and popular hostess.

The couple hosted many events in the beautiful third floor ballroom and the property was considered the social center of Barrington.  The house was the setting for many Barrington’s Women’s Club banquets in the early 1900’s.

It was also known to be a tea house with this photo taken circa 1920.

The Village of Barrington purchased the house from Barrington Realty in 2007 as part of efforts to revitalize the downtown area. 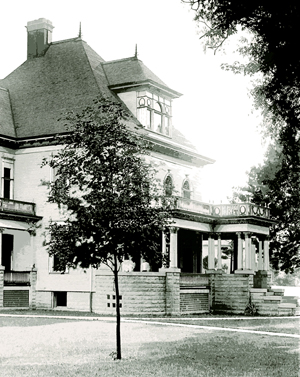 A brand new campaign is now underway to restore the building to its former grandeur so it can serve as a cultural and community center and an historic gathering place for all generations.

Once the renovation is complete, there will be public spaces on the first and third floors.  The first floor will retain its original configuration with an elegant front entryway, north parlor, east parlor, dining room, west parlor and kitchen.

The third floor remodel will expand the original ballroom to accommodate seated parties of 150 people.

The second floor space will mainly be divided into professional offices for non-profit organizations to lease.  The Village says their goal is to transform the house into the “epicenter for entertaining all generations and creating new community and family traditions.”

Barrington’s White House campaign is being led by a volunteer committee that will be working to raise funds to support the restoration and renovation of this iconic landmark in the center of Barrington.

Village President Karen Darch says “Everyone can be a part of the renovation and revitalization.  Barrington’s White House will be owned by the community.  We would love to have the renovation completed for the Village’s Sesquicentennial (150th Anniversary) in 2015.”

The public is invited to tour Barrington’s White House at 145 W. Main Street on both Saturday and Sunday this weekend.

Barrington’s Let It Be Us invites you to…

Bring your young valentines and take a step…