Events, Polo, Sports, The List Year to Date, Things to Do

Gates open at 11 a.m. on Saturday, September 13th, for the 10th Annual LeCompte/Kalaway Trail Owners Cup in Barrington Hills and Pre-Game festivities before the first match begin at noon. The Riding Club of Barrington Hills and the Barrington Hills Polo Club spent today preparing for the annual polo tournament and say they’re excited to welcome some exciting and very high profile new sponsors to this year’s event.

Thousands of people from around Chicagoland and beyond are expected to visit Barrington Hills for tomorrow’s polo tournament and all are welcome to join the fun. General Admission tickets cost $15 and kids are admitted for free.

Event Chairman Patty Meroni says this is Chicagoland’s largest and best-attended polo event of the year. “This year, we have teams sponsored by Trump Hotels, Lake Forest Sportscars, Medieval Times and two Barrington Hills families, the Elders and the Harringtons.”

The five sponsored teams will compete in two exciting matches along with a host of other attractions to appeal to spectators of all ages.  The event promises fun for the entire family with the following tournament highlights:

2:20 – The Second Match/LeCompte Kalaway Trail Owners Cup Polo Match
The second match is the LeCompte Kalaway Trail Owners Cup, named for the LeCompte family who provides the venue for the event and the late Ben Kalaway, a well-known and beloved horseman in Barrington Hills. Lake Forest Sportscars, Trump Hotel Chicago and the Harrington family team will compete in this prestigious match using a “round-robin” format developed by the United States Polo Association. 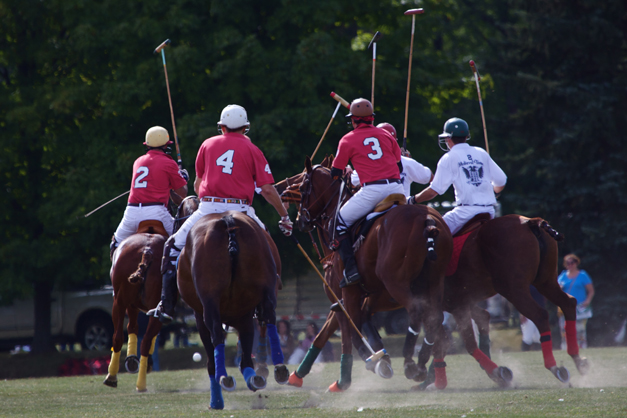 Patch 22 Hay Wagons
The popular Patch 22 hay wagons will give free rides and the young riders of the Fox River Valley Pony Club will demonstrate their skills. A “shoppers Midway” with vendors selling food, apparel, arts and crafts and even chiropractic services will be field side during the event.

The event will take place at the Oakwood Farms Polo Field on Deepwood Road just west of Bateman Road in Barrington Hills between Lake Cook and Route 62.  Gates open at 11 a.m., the price of general admission is $15 and children under 12 are free.

Our 365BarringtonTV video crew will be there to capture the tournament day excitement on camera and here’s a look back at last year’s event, courtesy of reporter Catherine Goetze.