It’s decided. This is officially “Nancie Tobison Week” here at 365Barrington.com! Nancie, Barrington’s very own 2015 Grammy nominee, made it to the top ten finalists out of 7,000 people nominated to receive the 2015 Music Educator Award during the Grammys coming up on Sunday night.  The Grammy people announced on Monday that another nominee has been selected for this year’s award.  So this week we’re celebrating Nancie’s remarkable achievement with heartfelt words of praise and gratitude shared by her past students.

The purpose of the Grammy Music Educator Award is to highlight and thank all of the teachers who devote so many hours to inspire us to love and play music.  Here’s how they put it on the Grammys’ website:

“For every performer who makes it to the GRAMMY stage, there was a teacher who played a critical role in getting them there… Maybe they introduced you to your first instrument. Or they showed you how to get over your stage fright. Or maybe they just inspired you to have the confidence to go for it when you were ready to give up.”

Does that sound like someone you know?  It does to me.

Nancie Tobison was my piano teacher years ago and taught me so much more than how to simply read music and play piano.  She showed me the rewards of hard work, commitment and discipline by expecting my best each time I sat down at her piano.  Nancie’s belief in my ability made me feel capable and gave me confidence.  That is a gift that lasts a lifetime.

When I asked Nancie what this Grammy nomination meant to her, she brought me back to those years I spent as her student. 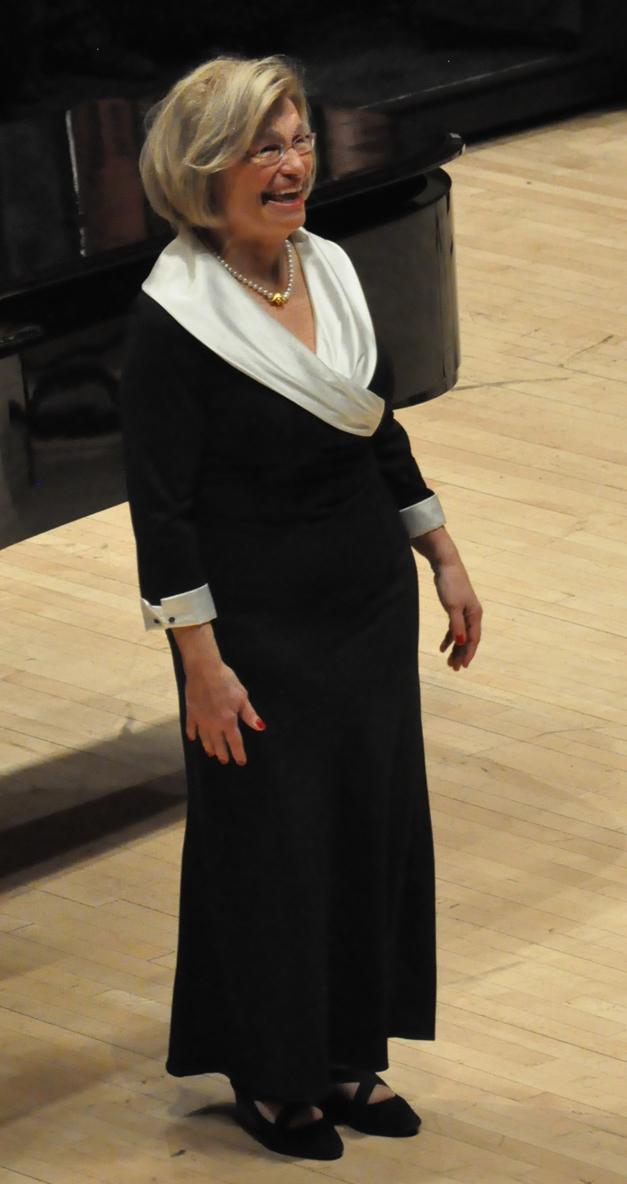 “You remember your piano recitals,” Nancie said.  “To me it has always been more about the musicianship than just being able to play a piece in a recital. To me, it’s not just about how anybody performed, it’s about what they actually learned that was going to be with them forever.”

On her list of many accomplishments, Nancie says making it to the top 10 Grammy finalists this year ranks right up there at the top.  “This may be the most affirming because most of the honors I have received have been for best choir or best choral director.  The Grammy Music Educator Award is for all music teachers from elementary school through college in band, orchestra, choral and music in general so it’s a wider thing.  I’ve always thought of myself as a music educator first and a choral director second. Making it to the top ten affirms that teaching has always been the most important thing.”

There’s an army of Nancie Tobison students who spent far more time with her than I did and credit Nancie with planting within them the confidence to pursue great work.  They crossed Nancie’s path during all stages of her career but, for many, it was during her 18 years teaching music and working as the choral director at Barrington High School.

Nancie retired from her role as BHS choral director in 2014 and you could write a book about all of the international performances and awards her students earned under her leadership.  But this week, we’re letting her past students do the talking.  I reached out to a number of them asking this one question:

How has Nancie Tobison been a source of inspiration in your life?

Here’s what they shared…

“One of the most lasting impressions that Nancie has left on me is to never settle for mediocrity, to always strive to achieve your personal best and do not accept any less than that. This not only means to encourage yourself to do well, but to be team player. As a team, we represented Barrington High School throughout the community and were expected to carry these values forward.

These lessons have stayed with me after leaving that high school choir room. After college, I served as a Teach for America corps member for two years in the DC public schools. As a teacher, I had time to reflect on what pedagogy had an impact on my own education and to consider which of those facets to emulate in my own pursuits.

Nancie deserves the Grammy because she inspires a passion for learning in others. Music education is important for building key math and science competencies, as well as for developing social skills. Students were excited about attending Nancie’s class and that enthusiasm translated into positive results, as demonstrated by our group’s many awards.

“Whether it was competing internationally or simply performing at local holiday parties, Nancie’s choral program gave us all the experiences of a lifetime.”  – Ashli Hessel

“After what she’s done and all the children she helped who wanted to pursue a life song, music and performing, I’d say Nancie earned this Grammy nomination.  I went to BHS and I’ve had Nancie from my 2nd year to senior year. I’m still a student to her actually. I was in the choir in High School, but I was also part of the Barrington Village Singers from sophomore year to this day. She’s taken me and a bunch of others all across the Globe for almost 7 years. We have an event coming next summer all over Italy.

I wasn’t very good at placing notes on music bars and knowing what key the music piece starts on (unless it was a piece I knew by heart). You might say she helped me discover new talents I didn’t know I had. Because of her passion, commitment and responsibility (and a few pep talks) and always screaming ‘Up and At’em!’, she inspired me to go on singing and keep up the good voice or make it better than it was as you grow older. I sing anywhere, anytime. Sometimes at work and nobody complains.

I am honored and fortunate to have had Nancie for a teacher. I loved music before I had her, but she amazed me with her knowledge and planning skills. Her motivational speeches, the sacrifices she made, the thousands she’s helped and the millions she entertained throughout her career. She’s a credit to the community and I am proud to have been a part of her adventures and concerts. And the concerts were the best part of the whole thing. Singing beside close friends on and off stage, those were my favorite moments.

One of the biggest honors was having Nancie for a teacher. She has made our whole town extremely proud.”  – Bradford Patterson

“Nancie Kozel Tobison made such a huge impact in my life, from piano lessons in grade school all the way through choir my senior year. She is more deserving of this award than I could ever describe.” – Brian K.

“So incredibly proud of Nancie Kozel Tobison!!! This is a woman who truly deserves this award and has impacted so many students. She’s taught students how to be ambitious, fight for what they want, and in her choir classes, to be more than just a singer, but to be musically educated and understand what you’re doing.” – Pamela C

“I’m so incredibly fortunate to have had Nancie Tobison as my teacher for several years. She showed me the beauty of music through her education, lighting the spark that has made music such a monumental part of my life today. I can’t thank Nancie enough for her dedication and can’t think of anyone who deserves this Grammy nomination more.” – Gus C.

“Congrats to Nancie Kozel Tobison! So blessed to have learned so much from her and seen her impact on the BHS Fine Arts program!” – Stefani M.

The 57th Annual Grammy Awards will be held this Sunday, February 8, 2015, at the Staples Center in Los Angeles, California and broadcast live by CBS at 7 p.m., our time.  Congratulations to Jared Cassedy, the teacher who will take home the Music Educator Award on Sunday.  Jared may have the Grammy, but Nancie Tobison is this year’s winner in our hearts.

If you have any thoughts about Nancie’s role as a music educator in the Barrington Community, please share them in the comments box below and we’ll continue to highlight her work through this weekend.  We’re proud of you, Nancie.  Thanks for putting Barrington in the Grammy spotlight!

Beautiful and serene are words that only begin to describe this stunning brick home in sought-after Timberlake of North Barrington. Stunning views abound through the walls of windows of this tranquil pond, featuring full outdoor amenities just feet f

Run with friends and finish with an Irish…