Artists, Arts and Entertainment, Classes, For Kids, Health & Wellness, Health and Fitness, The List Year to Date, Theater, Things to Do

Ever since the show, Glee, debuted on Fox a year ago, the idea of being in a high school choir has taken on a whole new meaning. Gone are the days of stiff, tuxedo-clad kids singing in unison. Today’s version of the “Glee Club” is hipper, cooler and a whole lot more fun. And that’s the motivation behind a new summer program being offered by the Barrington Performing Artz Center’s three day summer Glee Club workshops. 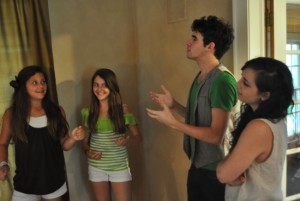 The Barrington Artz Center has hired two recent and very talented Barrington High School grads to teach the summer Glee workshops. Mac Dassatti who played “Will” in Barrington High School’s “Will Rogers Follies” last year is back from Syracuse University and teaching the workshops this summer along with BHS grad, Megan Tischhauser, who is back in Barrington on break from New York University. Both instructors are pictured above with two local Glee Campers.  They’ll teach the kids the fundamentals of singing and dancing as they recreate their favorite songs and scenes from the TV show.  The kids will have a semi-private singing lesson and learn a dance that they’ll perform on the last day of the workshop.  If you haven’t seen the show “Glee” yet, click the “play” arrow on this video for a sample. Warning: it’s one of those songs that might get stuck in your head and make you feel like dancing.

The Barrington Performing Artz Center has a whole list of upcoming summer classes for kids. Here’s a look at some options: 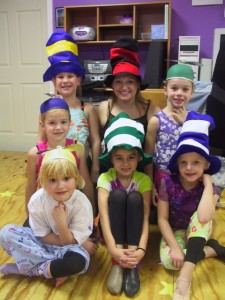 The Barrington Performing Artz Center is a non-profit center committed providing performing and fine arts experiences in the Barrington are.  This new concept in the northwest suburbs will feature unique programming in the areas of dance, movement, music, acting, piano and fitness. The studio is on the south side of Northwest Highway just east of Route 59 and in the same building as Language Stars.