With last week’s mystery photo we challenged you to identify the buildings and streets shown in a “Birdseye View of Historic Barrington” and we consulted with a local history expert who chose our winner.  We’ll announce the winner in just a minute, but first, here’s a look at our brand new mystery photo of the week taken by Barrington photographer, Anthony Tortoriello.  Can you guess where in Barrington Anthony was standing when he took this picture?

We have a great new prize for the winner of this new photo contest.  But first, let’s talk about last week’s winner.  Barbara Benson, local historian and author of the book, They Builded Better than They Knew: Historical Perspectives of the Barrington Area, reviewed the submissions for accuracy and chose the guesser whose answer most thoroughly described the Barrington landmarks in last week’s “history mystery photo”.  And the winner is…

John Clavin!  Here’s how John described last week’s mystery photo: “The street on the left is Railroad Street ( now it is called Park Avenue) and it intersects with Cook Street and then Main Street. Main Street is the street that crosses the Railroad tracks at an angle. 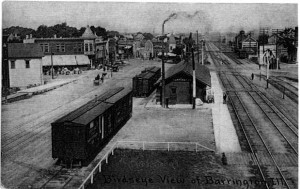 The photo is looking northwest. The store at Cook and Railroad with the pointed roof I think is Plagge’s Department store. Lipofsky’s 2nd store ended up just to the left of that building, but probably was not there when this picture was taken.  As far as where the picture was taken, I remember in the 1950′s there was a water tower at that location, so maybe there was one back then.

My mom’s real estate office was right there on Park Avenue so I knew that area well.”

Barbara Benson also says, “This photograph was taken before 1915, when a new brick depot was built on the Chicago bound side of the tracks. The depot in the photograph is the original wooden building that was moved on a flat car from Deer Grove (between here and Palatine) when the Village was founded in 1854. The white frame building at left, was Dan Lamey’s Barrington Fair Store, and was moved in 1916 to the northeast corner of Cook and Station Streets, where its best known use was as The Town Shoppe of Nibs and Audrey Veath, a coffee shop and soda fountain. In place of Dan Lamey’s store, The First State Bank of Barrington opened in 1916, a building of many reincarnations, now as McGonigal’s Pub.”

Congratulations, John and thank you, Barbara for this Barrington walk down memory lane. I’ll be emailing you this week, John, with details about how to receive your prize offered by the Barrington Area Library. Click HERE to view all of last week’s guesses and here is one more look at that “Birdseye View of Barrington”.

If you can correctly guess our new mystery photo of the week, you will win a gift offered by the business where the photo was taken.  I’m skipping the clues this week because I don’t want to give it away.  So don’t try to get any hints out of me.  My lips are sealed!

Here’s how it works:

There you go! All you have to do is SUBMIT YOUR GUESS IN THE “COMMENTS” BOX BELOW. If you’ve guessed in our previous contests, please feel free to participate again this week! We’d love to see as many guesses as possible. We’re also working on finding more great prizes for future “Guess Where Wednesdays”. If you would like to offer one of our upcoming “Guess Where Wednesday” prizes, please drop me a note at Liz@TheLubyGroup.com. Good luck with your guessing and here’s one more look at this week’s Mystery Photo.

We had a blast hosting our Fun at…

We’re down to the final challenge in our…