Today is graduation day for seniors at Barrington High School.  The graduating class of 2012 will walk across the stage and be honored in a ceremony at Willow Creek Church tonight with about 5,000 family and friends in the audience.

I just made my quick annual call to Barrington School District 220 chief communications officer, Dr. Jeff Arnett, for a few quick facts about this year’s graduating class.  Here’s what I learned about the BHS Class of 2012…

1.  750 students will graduate in tonight’s ceremony – that’s about 98% of this year’s senior class.
2.  Overall, 235 different students are graduating with honors tonight.
3.  Seven 2012 graduates have been named National Merit Scholars.
4.  Six 2012 graduates have been named Illinois State Scholars, the highest academic honor a student can achieve in the state.
5.  Students from this class will receive approximately $170,000 in local scholarship monies.  They are scholarships unique to Barrington High School and created specifically for BHS graduates.

Arnett also notes that this has been the “Year of the V.I.P.” at Barrington High School, with several high profile guests visiting the school to speak to students this spring.  Newt Gingrich addressed about 750 students and community members in the school’s auditorium in March when he was still in the running as a U.S. presidential candidate. 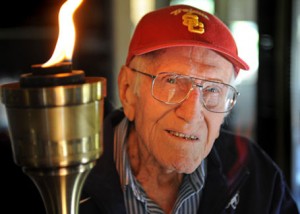 Zamperini told stories about participating in the 1936 Olympics in Berlin and his time as a prisoner of War in Japan.  He is the subject of the best selling book and soon-to-be-released movie adaptation, “Unbroken” by Laura Hillenbrand, who also wrote “Seabiscuit.” Zamperini shared some inside information when he revealed to the Barrington audience that actor Ryan Gosling is Hillenbrand’s first choice to play him in the movie version. His appearance was arranged by a Barrington-area acquaintance, Fran Houlihan, and the local Rotary Club.

Also in April, Stedman Graham visited with students at Barrington High School along with former Chicago Bears, Matt Mayberry and Desmond Clark, on behalf of the organization Athletes Against Drugs (AAD). Graham founded AAD in 1985. He’s also a best selling author, chairman and CEO of a Chicago-based corporate and educational consulting firm and is perhaps best known for being Oprah Winfrey’s partner since 1986.

I couldn’t help but ask Jeff Arnett to share his take on why BHS saw so many distinguished visitors this year.  “Part of it is the notoriety of the high school. It is certainly on the radar of a number of leading figures and organizations in terms of being a high school that produces a high number of top flight graduates. The other factor that probably contributes to that recognition is the fact that The Washingont Post, Newsweek Magazine and U.S. News and World Report list Barrington High School as among the top 20 public high schools in Illinois and the top 1,000 in the United States.”

Now that’s something to celebrate along with those diplomas tonight so congratulations and best wishes to the class of 2012!!!