Christmas, Holidays, Sponsored, The List Year to Date, Things to Do

It truly is Christmas in July as Barrington ChristKindlFest planners kick preparations into high gear for this year’s second annual outdoor holiday festival.  The committee is planning to increase ChristKindlFest from a 3-day to a 10-day event in 2014!  According to organizers, not only will this year’s ChristKindlFest last longer, it will also start earlier in the season and feature double the shopping plus more big-name bands for evening entertainment.

We recently caught up with ChristKindlFest organizers to get all the early details about Barrington’s biggest holiday bash that Santa & Mrs. Claus even stopped by to promote with an appearance this year’s 4th of July parade.

Generous community sponsors plus dozens of volunteers with The Barrington Village Association and Barrington Breakfast Rotary are the engine behind ChristKindlFest which takes place in the BMO Harris Bank parking lot in downtown Barrington. There’s even more involved with this year’s planning so, for all the latest updates, be sure to follow ChristKindlFest’s brand new Facebook page at Facebook.com/ChristKindlFest.

In the meantime, we caught up with ChristKindlFest Co-Chair Doug Skor who says they’ve come up with a list of significant ways to make ChristKindlFest 2014 bigger, better and even more fun with a few key takeaways from year-one.

Opening day at this year’s ChristKindlFest will be the day after Thanksgiving – Black Friday – on Friday, November 28th.  And instead of lasting only three days, this year’s ChristKindlFest will run a full ten days long, through Sunday, December 7th.  Doug says a longer event will help them cover costs.  He also says it will allow more time for more people to enjoy the event and will bring more people to Barrington.

“If you travel the world, there’s no such thing as a three day ChristKindlFest.  These are open air markets and they’re really designed around Old World Europe in country villages as a means of bringing the community together during the holiday season.  We are literally building a village in a parking lot and you can not create something of this magnitude for a three day event.  It needs the full ten days to live and breathe.  Our goal with Barrington’s ChristKindlFest is to give the community a place to share the holiday spirit and to support commerce among the existing businesses surrounding the fest.”

“At 170 feet long by 60 feed wide, this tent will be about 45% larger than last year’s tent and it will hold 1,000 people.  It’ll have a divider with double doors in the middle and one side of the tent will house the food and bar and on the other side you’ll find all of the entertainment.”

They’re bringing all of the featured German food, beer and glogg vendors from the outside in to the tent this year to be sure guests can stay warm and toasty while they eat, no matter how cold the weather is.  And, for the first time, they’re making the ChristKindlFest tent available as a venue for large-scale corporate private holiday parties during three nights of this year’s fest on Sunday, November 30th, Monday, December 1st and Tuesday, December 2nd.

(If you or anyone you know would like more information about the option to host a private party inside Barrington’s heated ChristKindlFest tent, call 847-387-3130 or email info@ChristKindlFest.com.)

Remember how cold it was during last year’s ChrsitKindlFest?   (I literally remember seeing one kid get his tongue briefly stuck to a metal rail enclosing one of the kiddie rides!)  Well, not only will a ten day fest earlier in the season increase the chances of milder weather.  Doug says they’re also preparing for all of Mother Nature’s possible weather scenarios by contracting with Caterpillar to provide the heat and power at this year’s fest.

“As a manager of events I know all too well that one thing you can not control is the weather so this year, we’re going to be ready for the arctic cold blast, should it hit again.  Last year we used the small propane heating systems that work well for when it’s maybe 30-degrees or above.  This year we’re really upping the game by bringing in big electrical heating systems that will heat the tent under some of the most extreme temperatures.” 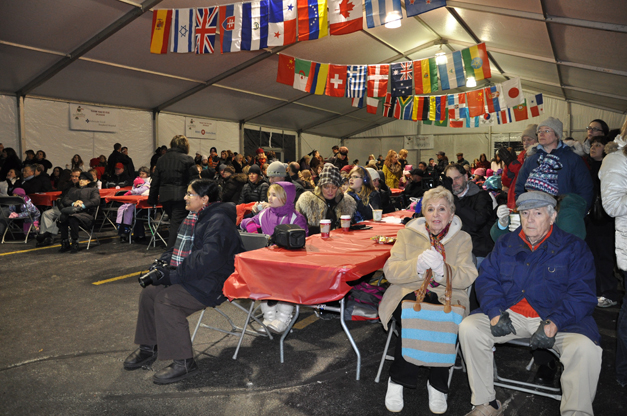 4.  Double the Huts for Holiday Shopping

Doug says crews with Pepper Construction will be building ten more wooden structures or holiday “huts” to double the amount of shopping available at this year’s ChristKindlFest.  They’re actively recruiting more local and international vendors so there will be a lot more to shop for at ChristKindlFest 2014.

“We’re going to have entertainment all day long throughout this year’s ChristKindlFest, with students from every middle school, grammar school and high school in a 30 mile radius invited to take the stage.  In the evening, after 7 p.m., the tent turns over to a venue for adults where we’ll feature more big name local entertainment.  We’re opening up the budget to book much bigger bands on the weekend nights this year.  There’s going to be a Christmas Blues Night and we’re thinking about adding a Rock Christmas Gospel Night to this year’s line-up plus some popular bands that historically have drawn big crowds in Barrington.  The entertainment level for all ages will be going up significantly this year and Barrington will be rocking in the Christmas season, that’s for sure!”

Plus, the authentic German food, brats, pretzels, beer and glogg will be back by popular demand, served inside the heated tent.  AND they popular kiddie rides and reindeer will be back along with Santa who will be visiting with kids during scheduled hours throughout the fest.

If you’d like to get in on the excitement and join a growing list of partners like Harris Bank, Pepper Construction, Advocate Good Shepherd Hospital and the Barrington Area Community Foundation in helping make this year’s event a huge success, call 847-387-3130 or email info@ChristKindlFest.com for more information.

And for a trip down memory lane, take a look at our photos from last year’s Barrington ChristKindlFest.  CLICK HERE to find the full album and enjoy our video report from ChristKindlFest 2013, courtesy of 365BarringtonTV reporter, Catherine Goetze.