The List Year to Date, Theater, Theaters, Things to Do

The screenplay by Steven Peros is based on his play of the same title, which was inspired by the mysterious death of film mogul Thomas H. Ince. 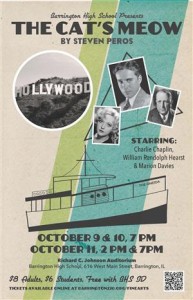 The Cat’s Meow offers a fascinating cross section of Jazz-era characters who intersect for one notorious weekend on board William Randolph Hearst’s yacht in November 1924.

This year’s fall production stars Barrington High School students as some of your favorite Jazz Era celebrities. Come see the show to watch one man’s take on the mysterious death that took place on William Randolph Hearst’s yacht. Witness the connections between Charlie Chaplin, W. R. Hearst, Marion Davies, Thomas Ince, Elinor Glyn, Louella Parsons and others who were present for this incredible story.

Tickets are $8 adults, $6 students (Senior citizens and BHS students with ID free).  Tickets may be purchased at the door or online at Barrington220.org/FineArts.

Prev post 282. Color the Town Pink at Deer Park Town Center
Next post 284. VIDEO: Broncos Prepare to Face Palatine After 55-14 Win Against Hoffman Estates in BHS Game of the Week