Equestrian Activities, Giving, Giving Back, Good Works, The List Year to Date, Things to Do

The new year is off to an exciting start for our friends at Walk On Farm in Barrington. It’s a riding center devoted to making life easier for people with disabilities and one of their therapeutic horses named “Taco”  just won a prestigious Equine of the Year award! 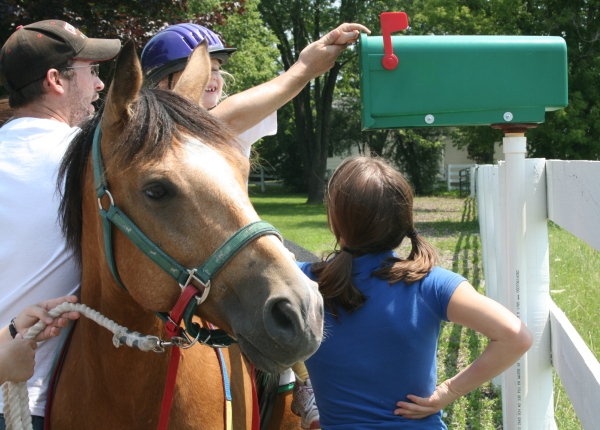 The North American Riding for the Handicapped Association, or NAHRA, gave Taco the award for the region that includes Illinois, Missouri, Iowa, Nebraska and Kansas. The trainers at Walk On Farm say Taco is very deserving.

“Originating from a humble beginning as a school horse, Taco has surpassed all expectations with this remarkable achievement. a 13.2 hands buckskin grade pony gelding, Taco has all the ideal qualities for equine therapeutic uses. He’s willing, smart, patient and, best of all, he’s cute and lovable.”

“One of the deciding factors for the award was a story about a hospice patient named Susan who rode Taco. Susan suffered from Parkinson’s disease. It was difficult for Susan to ride, but her determination and love of horses sustained her. Taco gave her a chance at the end of life to make a dream come true. In her wheel chair after the ride, she would pet Taco. He would place his head in her lap and nuzzle her while she petted him. This almost magical bond between Susan and Taco amazed everyone around them.”

The folks at Walk On farm say Taco has honored them with this award. And they recently received another honor as well. Barrington High School has chosen Walk On Farm to be their charity recipient for 2011! They’re in the process of deciding what fundraisers they will implement to support the efforts and the joy you’ll find at Walk On.

If you want to support Walk On Farm, they’re hosting a fundraiser coming up on Sunday, February 13th from 11:30AM until 3PM. It’s a party called “Lasso a Lane” at Brunswick Bowl in Deer Park. The cost is $25 per person and that includes bowling, pizza, raffles & dessert.

You can also read more success stories from Walk On right here at 365Barrington.com.  “Witness Wonders at Walk On Farm” was #138 on our list of 365 things to do in Barrington back in August and you’ll find that post by clicking HERE.You’ll find Walk On Farm at 26665 W. Cuba Road in Barrington and can learn more about their programs on their website at WalkOnFarm.com.