McGonigal’s Pub is making it easy to be Irish in Barrington this week!  They’re hosting the community’s inaugural 2-day “Barrington Celtic Fest” starting on St. Patrick’s Day morning.  The pub is also celebrating their one year anniversary, so I thought it would be a great time to catch up with owner, Bryan McGonigal.  He’s a busy guy these days, but he took a quick break and found a comfortable seat at the bar.  With the bartender busy in the background and a pint of Guinness within easy reach, Bryan filled me in on the festival details and highlights from his first year in business. 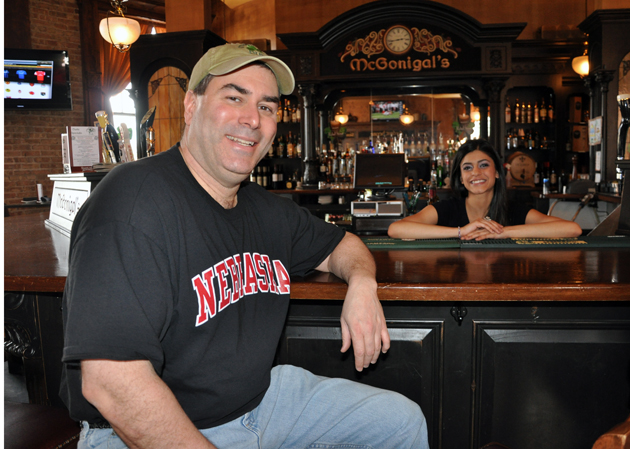 The fest will run tomorrow and Friday from 10AM until 1AM featuring a great lineup of live Irish music, Irish dancers, Corned Beef, Cabbage, a full Irish menu, pints of beer, NCAA basketball tournament watching and plenty of people in green.  Admission is FREE and you’ll find the full festival entertainment lineup below. But first, here’s Bryan’s look at the fest and McGonigal’s first year, in his very own words.

Liz: What were the highlights of McGonigal’s first year?

Bryan: Well, getting open before St. Patrick’s Day 2010 was perhaps the biggest highlight!  This was an immensely huge project – both the pub and Park Avenue Wine Bar – dealing with the sins of 100 year old buildings and a myriad of contractors trying to all work together towards a common goal.   The mere fact that we were able to pull it off really has to be the top highlight of the first year. Rarely a day goes by when someone doesn’t tell me “Thank you for opening the pub” or “Barrington really needed a place like this” or “Your pub is absolutely wonderful.”  I can never hear that enough, it really makes you feel good and that you’ve done the right thing, for both yourself and the community.

Liz: On the business side of things, did you meet your goals for McGonigal’s first year?

Bryan: Not only did we meet, but we exceeded our original goals & projections.  This was a big investment for our entire family so knowing that business is solid really bodes well for the future…and of course helping pay back all that invested money.

Liz: Any accomplishments you’re most proud of?

Bryan: I’ve been told I have a ton of things to be proud of, but I am only as good as the people that I have working for me.  With my general manager Damien Dunne, our executive chef Ted Stay, to my brother in law Steve Berry and his GM Tom Kalomiris, we have a solid core managerial group.  We also have an outstanding staff of individuals on both sides, from our manager/supervisors all the way down.  It’s like a big diverse family, and like any family we will be dysfunctional at times, but we manage to all work together towards a common goal.  I am truly proud that I can be an inspiration “father” to this group.  THEY are the ones who are making us successful.

Liz: Is there anything you were surprised to learn about running a business in Barrington or things you would have done differently looking back?

Bryan: I’ve been in Barrington for over 13 years and in the area (grew up in Palatine) for nearly 37 years, but you learn a lot more about your area when opening up a business!  There’s not much that I would have done differently during our start-up, but my initial vision of my Irish pub was on a much smaller scale, basically more of a drinking bar with a great fun atmosphere, a limited menu of decent pub grub, generally just more of an adult establishment.  Though we’ve accomplished most of this on a much grander scale, I learned that Barrington is very much a family-oriented community.  We don’t have game rooms or other kid-type of diversions for the young ones, but catering to the families is important here, and we quickly made the proper adjustments.

Liz: Is there anything specific you can share about new things McGonigal’s will be offering and goals moving forward?

Bryan: We’re adding a few things to the interior, and in later spring plan on a more decorative buildout and better signage for the exterior . . . we’re in a grand old bank building and there will be no doubt about that. 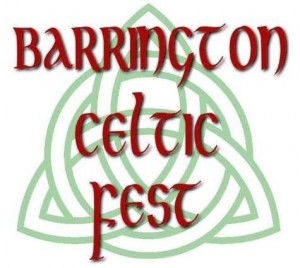 Liz: When did you decide to organize Barrington’s first Celtic Fest?

Bryan: We initially started talking about it at the monthly Village Merchants Meeting back in August.  One of the goals in these meetings is for the merchants to figure out how to attract more people to Barrington and showcase what the town is all about . . . what better way than a big festival!

Liz: Is it something you always envisioned for Barrington?

Bryan: The Village of Barrington has been very interested in doing more of these festival-type of events to add on to their mainstays like the Cruise Nights and Farmer’s Market.  Other regional communities (West Dundee, Long Grove) have done Irish-related festivals, and they are truly predominant in the city and south suburbs.  It seemed like a natural fit to have Barrington be involved in this type of event, and the village has been quite supportive of these initial efforts.  I envision even bigger and better things for future fests!

Liz: I know it relates to your business, but is there a personal reason why you love to celebrate St. Patrick’s Day?

Bryan: For me it was simply just a good reason to get together with friends and have some drinks.  Celebrating it as an owner of an Irish pub puts it on a whole different level.  One big difference is as opposed to spending money I can make some!

Liz: Anything you’re willing to share about your personal family ties to Ireland?

Bryan: The McGonigal family original hails from County Donegal, which encompasses the very northernmost part of Ireland.  The Irish part of my mother’s family (Moore) came from either the Kilkenny or Wexford region, we’re not entirely sure.  Unfortunately most of my older relatives have long since died, and my mother was the “family historian” but she passed away five years ago today (March 15).  Some of her knowledge left with her, so I have some additional research to do.

Liz: How many other local businesses are involved in the fest?

Bryan: Several, including Motor Werks, Harris Bank, The Village of Barrington itself, Clarke’s Bakery (also celebrating their 25 year anniversary), Coopers Pizza/Restaurant, Norton’s USA, Park Avenue Wine Bar, Identity Custom Sportswear, Paddy’s on the Square (from Long Grove), and a few other local entities that are making special appearances.  We have additional support from the Irish American Heritage center (located in Chicago), friends of ours like McNally’s Irish Pub and Akoo International, and of course our major beer distributor, Town & Country Beverages.

Liz: How would you sum up what people have to look forward to in attending the fest?

Bryan: Basically it’s a big St. Patrick’s Day party with more options than just drinking!  We have a food vendors, a big beer truck, lots of live entertainment both inside & outside in the fest tent (including Irish dancers Thursday afternoon), merchants selling and promoting their goods, souvenirs for sale, and of course our great pub in the center of it all.

Like any pub it will definitely be more of an adult crowd come late afternoon & evening, but we’re open at 10 AM both days (festival tent at 11 AM), so everyone is welcome to come by and experience a bit of Irish flavor in Barrington!

Liz: What do you love most about St. Patrick’s Day?

Bryan: It’s the one chance a year where everyone has the honor of being Irish!

Thanks for sharing and for helping make St. Patrick’s Day memorable in Barrington, Bryan.  I look forward to seeing you at the fest this week.  Here are the Festival details and the lineup of live Irish entertainment.

The big tent is all set up and ready to go for tomorrow’s start to the two-day Celtic Fest. The forecast looks beautiful, but they’ve set up heaters in the tent, just in case.  It’s set up right outside of McGonigal’s on the 200 block of Park Avenue in downtown Barrington and there’s entertainment planned in the tent AND on both levels of the pub.  Here’s the Celtic Fest lineup: 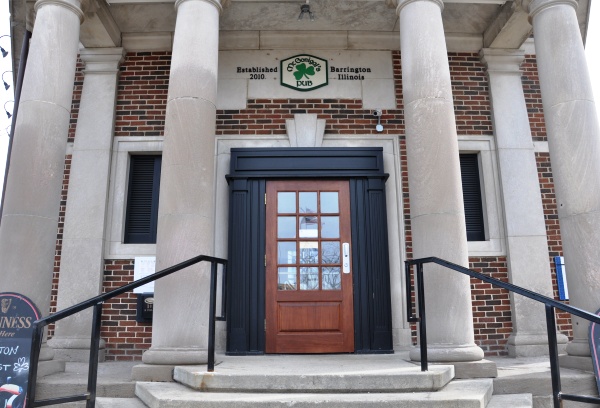